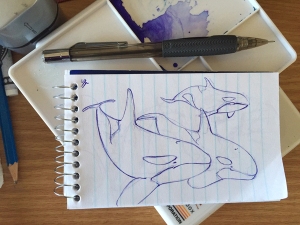 The original doodle in biro with my pencil for size reference. So tiny!

While my work computer was taking its sweet time opening a program earlier this week I found my pen inching dangerously close to a tiny notepad, so a quick doodle happened. Shocking no one, it was orcas. I thought about using it as the basis for a watercolour experiment, as I got a set a few months ago and haven’t had the time to really play with it. I used my iPad to create a rough colour reference before redrawing it onto watercolour paper, getting my paints out, getting to work… and making a jolly good mess of it. Watercolours and I still have a long way to go, but I found that I really liked my digital colour reference so I continued working on it. I don’t do digital work very often, but it is fun now and then (especially as I could sit and watch Qi on Hulu while I coloured), especially for creating things that are a bit more stylised than my usual work. 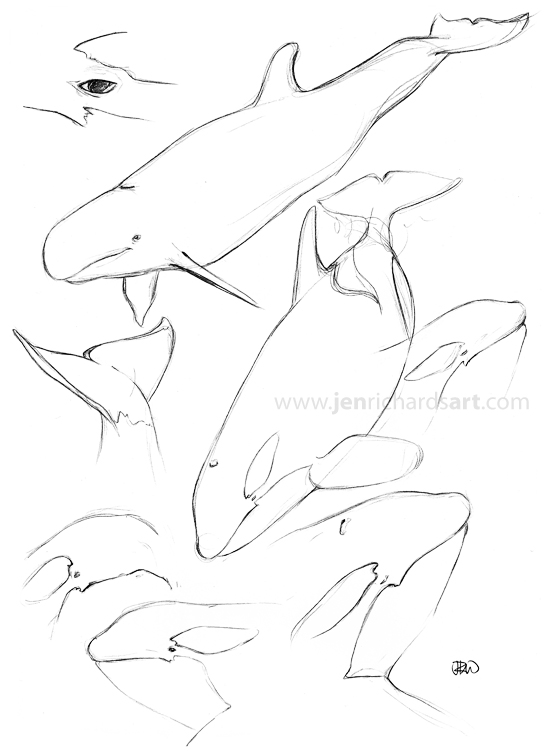 I sketched out a pseudorca (false killer whale) last night for the first time, but the page rapidly got taken over by the real deal. Whoops!

On the 11th July 2009 I was out on a boat in Tor Bay, the waters of my hometown in lovely Devon, England. I was one of two environmental educators running the trip for the monthly kids’ club at the marine facility where I worked, and it was a gorgeous day to be out there. A pod of common dolphins had been spotted nearby, but we unfortunately missed them by minutes. We did see a pair of peregrine falcons, though, and lots of seabirds (especially gannets, my favourite!). But the thing that left this day firmly embedded in my memory? When we were slowly passing through a particularly beautiful area known as Elberry Cove, I finally – after years of wishing and hoping and wishing some more – caught sight of an unmistakable dark brown shape gliding alongside us, dorsal fin slicing through the surface. It was definitely, absolutely, awesomely, a basking shark!

Basking sharks are the second largest species of fish (after whale sharks) and one of the three plankton-eating species (along with whale sharks and megamouth sharks). They can be found in temperate seas around the world, but the southwest of England becomes a hotspot for them during the summer. 2014 was a particularly good year for sightings, and excellent news for this Vulnerable species. (I’d also like to add that their scientific name is one of my all-time favourites: Cetorhinus maximus. Just awesome.)

I was so excited to see this juvenile basking shark that when I turned to go to the other side of the boat to take photos I slammed into a metal step, stumbling badly and causing an impressive pain (and later a bruise) in my shin, but barely noticed – I was too busy hurdling over the row of seats for a better view. The reward for my stunt were these mostly blurry photos. It’s OK to be jealous.

Basking sharks have long been a subject I’ve wanted to paint, and when I set myself the task of doing a series of Devon wildlife paintings I knew I’d be doing one. I definitely want to paint one again, and hopefully I’ll get to see another in person sometime.

If YOU are ever lucky enough to see a basking shark anywhere in the world, please do report it! These sightings help to provide data that is critical in protecting them. If you spot one around the UK you can submit it to the Shark Trust; if you’re in the US, you can report it to NOAA or the New England Basking Shark Project.