A terrible photo of a very rough sketch that I think I did in 2009.

This 11 x 14 acrylic painting was the result of two sessions. TWO! I’m astonished at myself. Usually my work gets dragged out for weeks because of work and other commitments that prevent me from holing myself up and painting from dawn to dusk. I had an advantage with this one though – one, it’s not as detailed as some of my more recent pieces, and two, I’ve had it planned for ages. When I went home to England earlier this year I found a lot of old sketchbooks, and within one of them was this pencil sketch. I’d wanted to paint it years ago but ended up crossing the Atlantic instead, and it was long forgotten until my recent trip. As soon as I saw it I decided I wanted to paint it for real, so I snapped a quick photo of the sketch for me to work on when I returned to my studio.

A screenshot from Procreate showing the rough colour ideas. I ended up going a lot less green.

… and promptly forgot about it. Again. At some point I had even planned out my colours (which ended up differing a bit in the final version) and tones using Procreate on my iPad – something I often do when planning a painting. While browsing my files in Procreate last week I rediscovered it again, so I just went for it and tried not to sweat the small stuff. So here it is! A fun little painting that allowed me to prove to myself that I can finish things more quickly if I really try… or remember to do it in the first place.

Orcas have been my favourite animal on the planet since 1994. There are so many things I find utterly captivating about them, but one of my very favourite things is the uniqueness of each population of orcas around the world. To name just a few… in the Pacific Northwest you’ll find residents, who only eat fish, and transients, who only eat other marine mammals. In New Zealand you’ll find the expert stingray hunters. In Argentina you’ll see the ones that beach themselves to catch seals. And in Antarctica you’ll find the wave washers – orcas that have learnt how to use teamwork to create waves that wash seals off ice floes. Not only are each of these behaviours specific to these geographically distinct groups of whales, but their genes are too. The differences in social structures, feeding, and habitat preferences between the world’s orcas are so distinct, having not interbred for hundreds of thousands of years, that many believe they should be separated into different species. They don’t just act different – they look different, too.

NOAA and natural history illustrator Uko Gorter released a brilliant poster showcasing these different ecotypes and the variations in their shape, size and markings. The wave-washing orcas of the Antarctic (whose incredible behaviour you can see here, though sadly not narrated by David Attenborough) are known as type B, and they’ve fascinated me for a long time. The diatoms in their chilly native waters cause the normally white areas of their body to appear yellow, and their dark skin looks grey or even brown and are often dotted with rake marks and other scars. There’s even a pale line that sweeps from the tops of their eye patches (which are huge, by the way) to the edge of their saddle patches. They’re just weirdly beautiful creatures and I’ve been dying to paint one for ages, so while warming up the other day on a 14 x 11 inch canvas I ended up with a composition that’s been on my mind for a while: a type B orca sinking back into the strikingly blue Antarctic water post-spyhop. Maybe he found a seal. 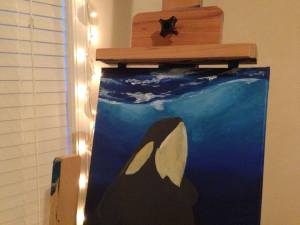