1. Experiencing or tending to bring about renewal or revival.
2. Sweeping or surging back again.

I had mentioned before that I wanted to paint an oceanic whitetip shark, and this month couldn’t have been a more appropriate time to do it. At the beginning of March, the 16th Conference of the Parties of the Convention on International Trade in Endangered Species discussed proposals to add oceanic whitetips and several other overexploited elasmobranchs to CITES Appendix II. This would significantly change the game for these species by regulating their trade and helping to bring relief to devastated populations (oceanic whitetips in the Gulf of Mexico had seen a 99% decrease in population). This is what so many scientists, conservation organisations and individuals had been tirelessly working to achieve. The proposals for manta rays, porbeagle sharks, oceanic whitetips and scalloped, great and smooth hammerheads all initially passed, with delegates highlighting these species’ low reproduction rates and importance to ecotourism despite much pressure from Japan and China, but it wasn’t until the conference was almost over that each of those proposals were upheld. It was a massive win for these animals, and worth all the sleep I lost watching a grainy, slow video feed from Bangkok.

Oceanic whitetips have caught my attention for a long time, not just because of their striking colouration but because their pelagic lifestyle leads to such stunning imagery: greys and bronzes and white tips flanked by black and white escorts, all surrounded by a seemingly endless deep blue. I used a 10 x 20 100% cotton duck canvas for this one, which created a slightly different texture than what I’ve become used to. It was very enjoyable to paint on! And despite any grumblings I may have uttered as I worked on them, I actually did like adding a lot of small detailing to the pilot fish.

Size comparison of my finger with one of the pilot fish: ow, my eyes.

My thanks and congrats go out again to everyone who worked so hard to afford this victory for our sharks, especially the dedicated folks at Shark Defenders, the CITES4sharks coalition, and PEW Environment Group. Sharks are far from being out of danger, but this was a big bright spot in a complicated struggle.

I have a favour to ask of you: If you hear me saying “I know a quick little painting I could do! A jelly! How hard could THAT be?” please slap me and bring me to my senses. Because what was supposed to be a quick 8 x 10 study of a Pacific sea nettle seems to have taken me about a month and a half (in the little bits and pieces of time I’ve been able to make for painting around work and life stuff… I know, breaking my new year’s resolution dreadfully). It was very cute of me to think that it’d be simple. Painting an animal that is more 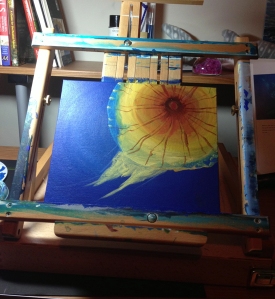 than 95% water is actually a bit of a nightmare – the translucency was driving me nuts. I feel like I’ve learned a lot just from this, though, and of course it was fun to do another invertebrate.

Pacific sea nettles, so common they’re a nuisance off the Oregon coast, caught my interest because of their colours. You have to love the bright oranges and those gorgeous patterns on the bell. Glad I didn’t opt for painting those ~12 foot long tentacles though. 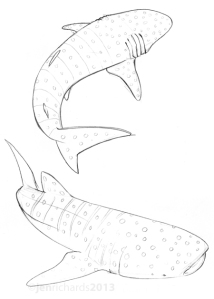 A couple of weeks ago, the lovely Dr. Al Dove appeared and asked me to do something awesome. The 3rd International Whale Shark Conference was to be held in Atlanta this coming October, and it needed a logo.

I did a very good job at not falling out of my chair. To have the opportunity to use my art for something so important to me – the

conservation and research of whale sharks, a species that has become a big part of my life – is quite literally a dream come true. After some chatting and discussing of ideas, I was sent off to sketch and came up with eight or nine scribbles. One of the ideas we’d mentioned was the trademark “swoopyness” of whale sharks, that huge sweeping caudal fin that creates a beautiful silhouette as they swim (and is one of my favourite things about them). As such, I doodled a few swoopies. The intention was to create a simple outline from one of these sketches, something that had a visual impact and was undeniably whale sharky.

The four on the sides here were my attempts at different angles of this swoopiness. The one above was an idea I’d had early on that was a bit different – something that showed a whale shark doing what they like to do best – eating things – while the reflection of the animal on the surface would form a world map, incorporating the whole “international”

part of the conference. But we ended up going with something quite different entirely: the one I had affectionately called “blimp.jpg”. Al and I agreed that this one was more interesting because it shows the face, and whale shark faces are the best. (Really, though.) It also offered a different angle, something a bit more abstract but still undeniably whale sharky, and did a better job of alluding to the size of a BIG animal than any of the others did. Success!

So here we are now. With a bit of editing of the angle, some inking and colouring and letters and a map, he’s live on the website and will hopefully do a good job of welcoming some of the world’s top whale shark researchers to the United States this autumn.