Personally, I’m in the latter camp. It’s a remarkable animal. The humphead, or Napoleon, or Maori wrasse is the largest of the family, with adult males reaching about six feet in length and weighing more than 400 lbs – and if its size wasn’t enough, its bright greens and blues and even purples make it impossible to ignore. I love to lean in close when ours is by the acrylic window to get a good look at those intricate markings along the sides that look like an inaccessible maze. On the forehead is – surprise! – a big hump that grows along with it, and it has big, attention-grabbing lips. This fish seems to demand attention, but it’s actually quite shy.

It’s also an endangered species; habitat loss and years of exploitation are just two man-made factors that, combined with its slow reproduction rate, have led to a decline of at least 50% in the last thirty years.  More data is urgently needed in order to understand the scale of these threats and to form effective conservation measures ensuring its survival.

I feel like a grey sketch of the humphead wrasse does it little justice. I’ll find time to paint one in full colour at some point, and hopefully get more people to appreciate its rather unconventional beauty. 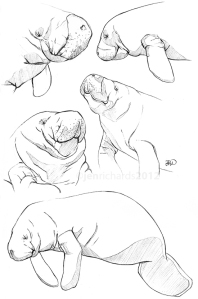 I didn’t know what a manatee was until I came face-to-face with one on a family holiday to Orlando in the early 90s. Although orcas dominated my brain (and every piece of blank paper in the house) for years after we returned to England, the manatees stuck with me in a big way too. Seeing these strange, gentle grey lumps drifting peacefully about their habitat and learning that those horrific scars and lost limbs were the fault of humans – the result of our careless intrusion into their world – didn’t sit right with me. I became so enamoured with these creatures that my family rushed out of the Shamu night show early on our last evening at the park to beat the crowds leaving just behind us so that I had time to buy a small plush manatee at the gift shop. We took a photo of me crouching next to the license plate of our rental car, holding my manatee and pointing, because it featured one right in the middle.

There was a piece on the plight of the manatee on children’s TV not long after our trip. The details are fuzzy to me 18 years later, but I remember jumping at the chance to write in and get involved. I donated what little I could. My primary school held an animal story writing competition; I wrote (and lovingly illustrated) a short story about an injured manatee being rescued and released. I still have my winning certificate somewhere.

These guys were really the first time I was able to get involved with a conservation issue and I’ve been passionate about it ever since. Several people have suggested I paint manatees and I’d love to – these sketches are some practice. I’d already drawn three out of the five when I learned that today is the 64th birthday of Snooty, the first manatee born in human care and an amazing ambassador for his species, just like the ones that touched my heart when I was eight.

In my previous post I mentioned how I’d started this over a year ago, back when I had my little table easel set up on the kitchen table. Since receiving a long-awaited floor easel last Christmas and turning the spare room into my own orca-filled studio, I’ve felt much more at ease painting larger pieces.

Though this is only 12 x 30, it’s my largest yet (and a nightmare to photograph), and while working on it I tried to loosen up my style some and play with some texture. My favourite thing about acrylics is their versatility: the ability to water it down into a wash or apply it heavily, like oils. It’s not easy to see detail on the full image so I took a close up photo that shows the brushwork a bit more clearly. So many of my paintings represent a calm sea, but the sea I grew up with was rough and powerful, and I wanted to try exploring that here. It makes me want to paint the native marine wildlife of the British coast that I spent so much of my life with.

Finding time to draw, let alone paint, has been difficult over the last few months. In an effort to produce at least something in the near future I ended up going back to an old canvas I’d all but abandoned more than a year ago, and started fixing all the things I didn’t like about it… which was pretty much everything. I’ve been working on it as and when I’ve been able to and am still not really satisfied; it’s likely I just need some time away from it so I can stop nitpicking and go back to it with fresh eyes at a later date. Hopefully my impatience will let me.

I’ve been planning on having a blog for my website for quite some time now, with the intention of sharing more sketches, works in progress, musings on marine life that inspires me, and the occasional announcement, if anything noteworthy were to happen.

I’ve been accepted as a new member into the Ocean Artists Society, an incredible network of artists of all kinds united by their passion for the ocean and their dedication to raising awareness of our need to protect it. To be among such talented people – many of whom have been inspirations of my own since I was a kid – is an unbelievable honour. Their images decorated my bedroom walls and their names filled my bookshelves for so many years. I’m thrilled to be a part of something that means so much to me and am excited to see what’s next!